Sight or vision is the capability of the eyes to focus and detect images of visible light and generate electrical nerve impulses for varying colours, hues, and brightness. Visual perception is how the brain processes these impulses: recognising, differentiating and interpreting visual stimuli through comparison with experiences made earlier in life.

Smell or olfaction is our ability to detect scent – chemical, odour molecules in the air. Our olfactory system begins in our nose which has hundreds of olfactory receptors. Odour molecules possess a variety of features and, thus, excite specific receptors more or less strongly. This combination of excitement is interpreted by the brain to perceive the ‘smell’.

How olfactory information is coded in the brain to allow for proper perception is still being researched and the process is not completely understood, however, what is known is that the chemical nature of the odorant is particularly important, as there may be a chemotropic map in the brain.

Taste, or gustation, refers to the capability to detect the taste of substances such as food, certain minerals, and poisons, etc. The sense of taste is often confused with the “sense” of flavour, which is a combination of taste and smell perception. Humans receive tastes through sensory organs called taste buds concentrated on the upper surface of the tongue. There are five basic tastes: sweet, bitter, sour, salty and umami.

Hearing, or audition, is the ability to perceive sound by detecting vibrations, changes in the pressure of the surrounding medium through time, through an organ such as the ear. As with sight, auditory processing relies on how the brain interprets, recognises and differentiates sound stimuli.

Touch, or somatosensory, is a perception resulting from activation of neural receptors, generally in the skin including hair follicles and a variety of pressure receptors respond to variations in pressure (firm, brushing, sustained, etc.). 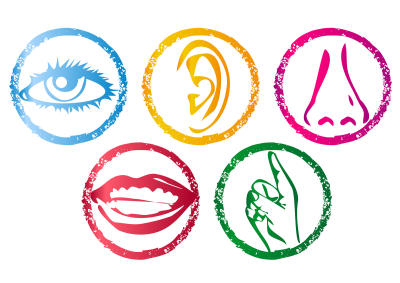